During my feedback tutorial, In terms of consolidating and linking all of my work together, the tutor felt that to amalgamate the elements of experimentation within my project, I should consider combining my paintings with my tracing paper and photo-manipulation experiments. We talked about the idea of “The Transient City” and how the people around you change and are only around for a short time. There is no time to build conversation or relationships with others in the city. We discussed how this can add to the feeling of loneliness and how the city around you can become overwhelming and a blur. When thinking about the city being a blur, I thought about my tracing paper experiments and how the paper blurs out the background of a photograph. We came to the conclusion that more focus should be put on the figures and how combining tracing paper with my paintings could produce a foggy effect. When thick fog descends on a city, you cannot see anything or anyone else and you feel isolated and alone within a misty atmosphere. I came to the conclusion that combining tracing paper with my paintings would undoubtedly add to the feeling of loneliness within them.

I started experimenting but felt that the figures were lost behind the milky paper. I decided to heighten the feeling of loneliness further, I would stick people from my photographs on top of the tracing paper and match them up with the white silhouettes in my paintings. It seemed fitting that I incorporate figure overlays for all of the figures but one. I thought that leaving the coloured figure that is already isolated in my paintings without an overlay would add to the aesthetic of them being singled out and feeling alone amongst a sea of passers by. After experimenting with these ideas, I decided to photograph the result and incorporate the pictures into a faded video.

I feel that this clip brings together everything I have learnt and experimented with into a conclusion portraying the fact that it is a sad affair that in the city, people can come into contact with and see others every day but feel out of their comfort zone, lonely and isolated. I think this piece shows how to you things around you might as well be foggy and hazy and to others you might as well be invisible as you go unnoticed and unappreciated. The ideas and concepts at work here emphasise the hidden loneliness of City life and therefore I feel that I have successfully portrayed the concept that I set out to depict and adhered to the brief I was given. I am incredibly happy with the body of work I have managed to create, working with figures was highly out of my comfort zone and showing the feeling of loneliness was very challenging to me. I have really pushed myself this term and I feel that is what undertaking a degree is all about.

VIDEO OF PAINTINGS: The Hidden Loneliness of City Life

I was incredibly pleased with the feedback that I received within a tutorial that I attended before the Easter break. I was delighted to hear the tutor mentioning successes within the body of work that I have created and agreeing with me that creating a stop motion was a great way of consolidating my photo manipulations and works well as a final piece to this project. We talked about how everything seemed to inform something and that you could see my journey and progression throughout this project rather that there being lots of random experiments. I was very pleased with this feedback and we then moved on to discuss how the tutor felt I could finalize this work and bring everything together. He felt that making a fade video out of photographs of all my paintings would be beneficial and would allow people to see the development in my work and consolidate a large amount of blog posts and images into one outcome.

After producing this piece, I feel that to me, it shows progression and all the hard work that I have put in to produce paintings alongside my photo-manipulations, animations, experiments and my collaboration work. In terms of the title of my project, I feel that when looking at these paintings you get the feeling of loneliness. I have worked with the topic of the Hidden Loneliness of City life when producing these paintings. When experimenting with photo-manipulation I found that cutting out figures and leaving one left behind portrayed the feeling of being alone in the city even though you are surrounded by others. I thought about the fact that all the other people in the city may as well not exist or at least might as well just be white silhouettes. These paintings were inspired by my photo-manipulation work and I have experimented with grounds, colours, loneliness representation and scale throughout. I think the theme of the white silhouettes running through the video heightens the feeling of the single figures feeling alone amongst the masses in the city.

Overall, I feel that both these paintings and the video portraying them all are highly successful. I think this video shows the journey that I have undertaken during this project and brings together all of my paintings so that they can be viewed all at once. I hadn’t realised quite how much work I have created and I am incredibly proud of what I have achieved within this project. The loneliness of City life is heightened within this piece and it showcases my work in a professional and consolidated way.

PAINTING: Working with Monochrome and Being More Gestural

After attending a tutorial on Monday, I was glad that the tutor gave me some direction and new ideas and techniques to work with. After looking at my work, she suggested that I work with Monochrome and use the tones of grey to enhance the feeling of loneliness and make the individual coloured figure appear even more singled out and alone.

She also felt that my work was not really gelling as a whole and that I was working with three different realities and had to express the relationship between the figures, the single figure and the architecture. She said she thought the detailed buildings that were included in my work detracted from the figures and from the message within the pieces. She suggested that I experiment with contrasting colours, monochrome and full colour as well as contrasting languages, the gestural and the more realistic. I was encouraged to make marks and shapes that represent the buildings and to make them more gestural rather than focusing on every detail, window or door etc. I have experimented with making less detailed marks to create the city landscape with both brush and palette knife. 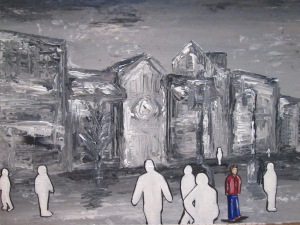 I feel that working with a palette knife definitely helped me be less controlled and more gestural but doesn’t really gel with the figures painted with a brush and therefore is unsuccessful so I have experimented with more gestural brush work.

I think this is far more successful and the monochrome definitely heightens the feeling of loneliness and the colours of the lone figure. After producing this piece, I decided to experiment with how much of the surrounding is seen within the painting, because even though the technique is successful, I feel that the buildings still are overwhelming the figures here. 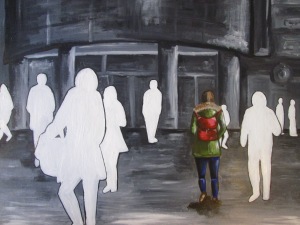 This definitely puts emphasis on the lone figure and draws the viewer to wonder why they are the only one not painted as a white silhouette and consider their loneliness rather than being distracted by the buildings in the piece.  These are highly valid experiments and have inspired me to create a final piece working with monochrome rather than the sepia alternative I have worked with previously. I feel this colour palette and deeper contrast portrays a more negative vibe and adds to the feeling of loneliness within the work.

Edward Hopper 1882-1967 was an American Painter who is known for painting american landscapes and cityscapes. The most well-known of his works is NightHawks 1942, it portrays people sitting in a downtown diner late at night. It is of high interest to me, because it is one of the most famous paintings highlighting urban isolation. His work highlights existential loneliness in the industrial city and portrays how people in cities are lonely because of the emotional disconnection from others.

Every person painting within the work of Edward Hopper appears to be terribly alone. Hopper himself didn’t see the loneliness within his paintings which I find incredibly intriguing. Unlike me, he didn;t set out to create work based around this theme.

“The loneliness thing is overdone.” More likely than “loneliness” is the sense of self as different and apart, feelings not limited to Americans. – Edward Hopper 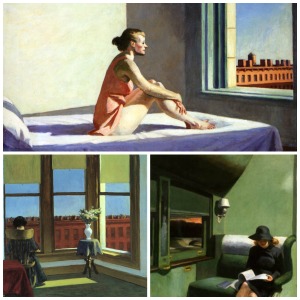 Edward Hopper gained a widespread reputation as the artist who gave visual form to the loneliness and boredom of city life. There is a stark portrayal of emptiness and loneliness within all of his works. Characteristics that I would like to capture within my own work.

Edward Hopper’s work is highly influential. He captures a sense of loneliness by painting frozen moments. He has focussed on the same sort of themes as I am planning to investigate. People alone in cafe’s, how people are around one another but not interacting, people alone on public transport reading papers (now replaced by modern technologies) and being alone in a room or living by yourself in the city. It is interesting to see how he has captured these observations. There is alot of emotion within his work and unusual lighting which I believe adds to the depiction of feeling lonely. Hopper never painted narratives. It’s up to us to find our own stories within his work. This encourages me not to focus so much on narrative and more on depicting the loneliness itself.

Does the Colour of Food Mould and Decay Add to the Stereotypical Repulsion of it?

DOES THE COLOUR OF MOULD ADD TO THE HUMAN REPULSION OF IT?
IF IT WAS A DIFFERENT COLOUR, WOULD IT BE LESS REPULSIVE AND THEREFORE MORE ATTRACTIVE?
IF YOUR FOOD SUDDENLY DECAYED IN BRIGHT, APPEALING COLOURS WOULD YOU BE LESS DISGUSTED BY IT?
These are some of the questions I asked myself when producing this series of six different coloured moulding canvases.

To me, It is obvious which one of these paintings looks like mould because of its colour! 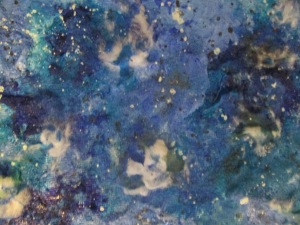 In these six pieces, I have experimented with making mould in exactly the same way as I have in past replica moulding canvases. However, here I have painted them in more attractive colours as well as the stereotypical greeny brown colour that mould is. The textures and materials used are exactly the same in all of the pieces but the colour of the pieces definitely change how you think about them and their visual appearance a lot. In my opinion, this set of six as individual pieces and as a piece as a whole are highly successful. 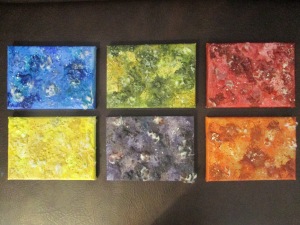 Although all of the pieces are incredibly interesting, THE GREEN COLOURED CANVAS IS THE ONLY ONE THAT REALLY LOOKS LIKE IT COULD BE MOULD. Therefore, the colour of mould DOES effect our ability to identify it and our repulsion of it. The fact that colour affects how we associate and see things is an interesting concept indeed.  My experimentation here was a success and my assumption turned out to be correct, colour is a massive contributing factor to our understanding of what something is or what something looks like. 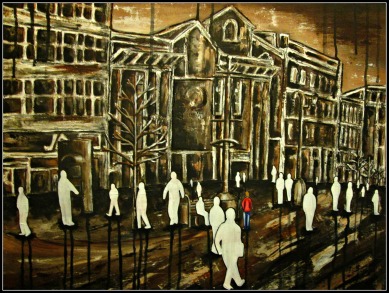 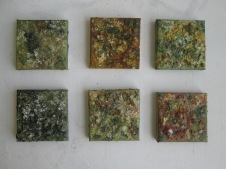 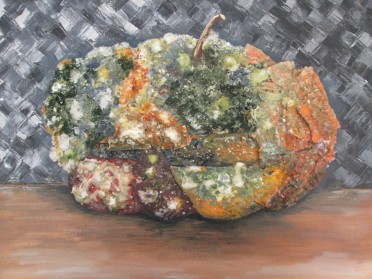